Diminished ovarian reserve at a glance

What is diminished ovarian reserve & how is it a cause of infertility?

In practical terms, ovarian reserve is the same thing as the biological clock. Most women are aware that there is such thing as a biological clock, but they are frequently uncertain when this clock really begins to tick. Some women remain fertile into their late 40s, while other women lose their fertility in their 20s and 30s.

Many cases of diminished ovarian reserve are never explained, according to the American Society for Reproductive Medicine, but common causes are:

Brenda wouldn’t let diminished ovarian reserve stand in her way, so she found TRM and put her faith in Dr. Murray.

Why does infertility in women happen sooner for some than for others?

Every woman is born with all the eggs that she will ever have: approximately 2 million. Every day, including through childhood, women lose eggs. Eggs are lost even if a woman is on birth control, is pregnant, or has infrequent menstrual cycles.

Additionally, as a woman ages, the eggs and the cells around them can accumulate damage that is never repaired. Therefore, as a woman ages, not only does she have fewer eggs, but a higher percentage of her eggs are abnormal due to damage from the aging process.

Women with diminished ovarian reserve were either born with fewer eggs than is normal, lost them faster than most women, or over time the eggs accumulated more damage than normal.

The white circles above represent normal eggs and the grey circles represent abnormal or damaged eggs. Notice that at birth, when egg number is at a maximum, there are a minimum number of abnormal eggs.

At the onset of puberty, a woman has already lost approximately 75% of the eggs she was born with. By her late 30s, a woman’s egg numbers continue to decline: notice in the illustration that now the ratio of normal to abnormal eggs has shifted, with a much higher proportion of abnormal eggs. By the time a woman reaches menopause, almost all remaining eggs are abnormal.

What is ovarian reserve testing?

A woman’s diminished fertility potential is predicted by any abnormal ovarian reserve test. This means that while repeating the test may yield a normal result, any prior abnormal result predicts significant difficulty conceiving either spontaneously or with aggressive treatments including IVF.

However, it is very important to understand that even a significantly abnormal test result cannot exclude the possibility of pregnancy. Ovarian reserve testing best predicts pregnancy outcomes with IVF.

We typically perform this test on the third day of a woman’s menstrual cycle and use a vaginal ultrasound to measure how many follicles she has in a given month. A follicle is a collection of cells that contains the egg and nurtures the egg as it develops.

If the follicle survives to a certain size, it begins to collect fluid around the egg. This fluid is visible on ultrasound and looks like a small black circle on the ovary.

Below is normal: > 10 follicles seen on two ovaries combined

Below is abnormal: < 10 follicles seen on two ovaries combined

AMH is a hormone delivered by the antral follicles. Each follicle emerging from the storage pool secretes a small amount of AMH. The more follicles emerging from storage, the higher the AMH level. As a woman ages and the number of her eggs naturally decreases, so does her AMH level.

While low levels of AMH are an indicator for diminished ovarian reserve, higher than normal levels of AMH can reveal polycystic ovary syndrome, which can also affect a woman’s fertility. AMH levels can be measured at any point during a woman’s menstrual cycle. AMH is a fairly accurate tool used to predict how many eggs we can induce to grow during a treatment cycle.

How the test works

A woman with normal ovarian function will produce a lot of estrogen and inhibin (another hormone) in response to clomiphene, which will cause her FSH to decrease to normal levels.

A woman with poor ovarian reserve will not respond to the clomiphene citrate as well and will not have increased estrogen and inhibin production. In this case, the FSH will stay high.

If the woman has an elevated FSH or estrogen results on the initial labs that were drawn on the third day of her menstrual cycle, or a high FSH after the CCCT, then she has diminished ovarian reserve.

Baseline hormone evaluation of FSH and estrogen level is the most common test of ovarian reserve.

How the test is performed

If the test results are abnormal, the physician will have to put this result into context, considering the patient’s entire evaluation.

If the ovary is working well, it should not require a lot of FSH to function. If the FSH is high, the ovary probably isn’t working efficiently and the patient has diminished ovarian reserve.

The estrogen (estradiol) level is important for several reasons. For the sake of simplicity, think of estrogen as a way to validate the FSH level. 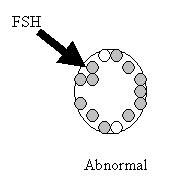 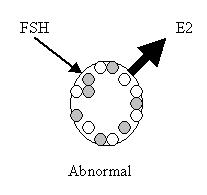 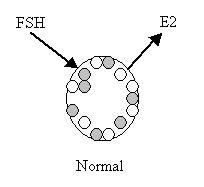 Why we don’t recommend home tests for ovarian reserve

There is now a commercially available kit that allows a woman to measure her FSH level at home. The kit measures the amount of FSH in the urine and can reliably tell her if her FSH is > 10 mIU/ml.

We do not recommend this test. First, the test is fairly expensive. Second, and more importantly, this is only helpful if it is abnormal.

Why not to be reassured by a normal result

This urine test does not assess estrogen levels. Because estrogen levels affect FSH levels, an individual has no way of knowing whether a normal test is valid.

Ten couples with the same circumstances may all make very different decisions. IVF, GnRH, eSET, ICSI – there’s an alphabet soup of possible treatments for infertility, but not all are going to be right for you. TRM helps you decide the best approach for your specific situation.

Learn About Treatments Request an Appointment