Getting pregnant at a glance

The reproductive organs make up an intricate system within a woman’s body. The uterus, also called the womb, grows a special lining (endometrium) each month that is shed during a woman’s menstrual period. If fertilization and embryo implantation occur, the lining helps to nurture the developing baby. The uterus expands in size as the baby grows.

Most women have two ovaries, which are on either side of the uterus. Eggs are stored in a woman’s ovaries. Typically, one egg is released by one ovary each month in a process called ovulation. Ovaries also produce different amounts of hormones, including estrogen, testosterone and progesterone, at different times of the monthly cycle.

The fallopian tubes extend from the uterus to each ovary and serve as a passageway for the sperm to reach the egg and afterward for a fertilized embryo to travel to the uterus.

The cervix, found at the base of the uterus, secretes mucus, the consistency of which varies with the stages in the menstrual cycle. At ovulation, cervical mucus is clear, runny and conducive to facilitating the movement of sperm. Post-ovulation, the mucus becomes thicker and more difficult for sperm to swim through. When a pregnant woman is ready to deliver her baby, the cervix dilates, or widens, to allow the baby to pass through the vaginal canal.

The entrance to the vagina is located in a woman’s vulva, which includes other parts of external genitalia such as the labia, clitoris and urethra. The vulva has two sets of skin folds, or lips. The thinner, inner folds are known as the labia minora, and the thicker, outer ones are the labia majora. Near the top of the vulva is the clitoris, which is a small structure that is sensitive to sexual stimulation. The opening to the urethra, where urine is released from the body, is also found near the top of the vulva, below the clitoris and above the vaginal opening. 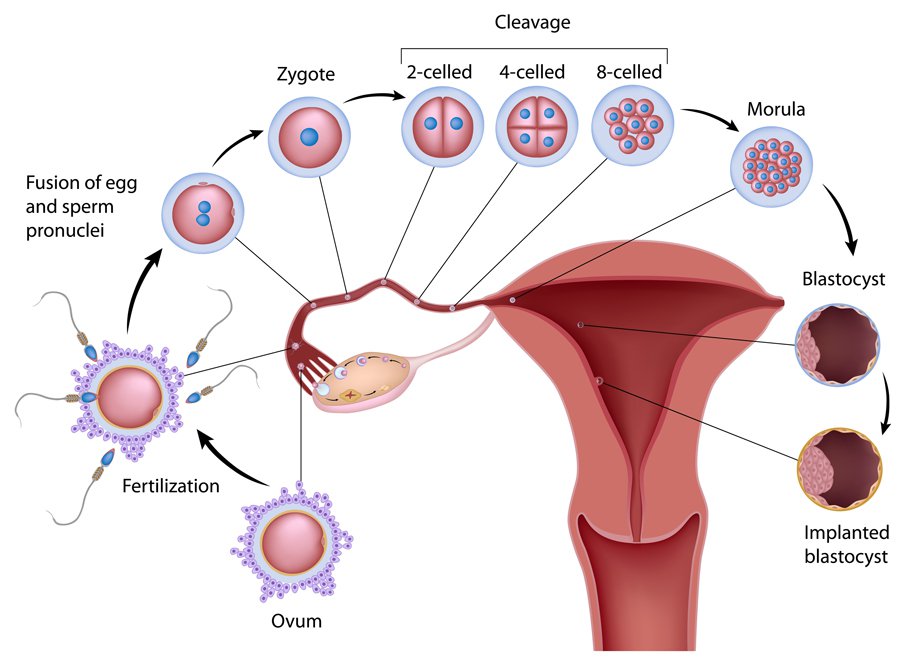 Every month, usually one egg grows within a structure called the egg follicle (a fluid filled sac that nourishes the egg). The follicle produces estrogen, which helps a woman’s body prepare for pregnancy by growing a new lining for the uterus.

When the egg is released (ovulates), the follicle begins making a second hormone called progesterone. Progesterone transforms the uterine lining into a mature lining that will accept a pregnancy. The follicle (called a corpus luteum at this stage) will make progesterone for about 12-14 days.

If pregnancy does not occur, progesterone production stops and this triggers a reaction in the uterus to shed the uterine lining. The menstrual material, which consists of blood, endometrial tissue, cervical mucus and vaginal secretions, passes out of the body through the vagina. Normal menses lasts for two to seven days.

Menstrual periods typically start when girls are between the age of 11 and 14, and continue until a woman reaches menopause, which often begins around age 50.

A woman’s menstrual cycle is measured from the first day of bleeding in one month to the first day of bleeding in the next month. An average cycle is commonly 28 days long, although it is normal to have cycles that are shorter or longer. In fact, only 1/4 of women have cycles that are 28 days. The commonly accepted normal range for menstrual cycles is every 24 to 35 days. Women may not ovulate at the same time each month and they may have irregular cycles that make the timing of ovulation more challenging to calculate.

The male reproductive system includes the penis, testicles (testes), the system of ducts known as the epididymis and the vas deferens, and the accessory glands, which generate fluids that nourish sperm and lubricate the ducts.

The penis has three parts: the root, the shaft and the glans (or head). All males are born with a foreskin covering the glans of the penis, which is sometimes removed by circumcision. The tip of the penis has an opening that leads to the urethra. The urethra is the tube that passes through the shaft of the penis and releases urine during urination or semen during ejaculation.

The penis contains cylinders of spongy, erectile tissue. During arousal, these become filled with blood, causing an erection, which is necessary for penetration. Semen, a fluid that contains sperm, is released (ejaculated) when a man reaches sexual climax.

Males produce sperm constantly in the testes (testicles), which are located in the scrotum, a pouch-like structure that hangs behind and/or below the penis. Most men have two testicles, which are also responsible for producing testosterone, a hormone that helps the male reproductive system function.

Normal body temperature is too hot for sperm to survive, which is why the testicles are located outside the body proper and in the scrotum, where the temperature is about 3.6 degrees lower. Sperm move from the testes to the epididymis, which are coiled tubes (one in each testicle) where sperm are stored and reach maturity.

The male anatomy also includes accessory glands, including the prostate gland, Cowper’s glands and the seminal vesicles, which create fluids that nourish sperm and lubricate the epididymis and the vas deferens. The vas deferens is a muscular tube that transports semen from the epididymis into the urethra during ejaculation.

Semen contains sperm along with mucus (to protect the sperm from the acid secreted in the vagina), proteins and fructose (the main energy source for the sperm), and prostaglandins that stimulate female uterine contractions, helping move the semen up into the uterus.

Getting pregnant: how does conception happen?

When the ovary ovulates, the egg is released and rests on the surface of the ovary. The fallopian tube sweeps over the ovary and picks up the egg and begins transporting it back toward the uterus. The egg lives for 12 to 24 hours after being released from the ovary.

If a couple has intercourse on the day of ovulation, or even up to six days prior, the sperm swim out of the semen and into the cervical mucus. Some sperm are stored in the cervical mucus for several days before continuing their journey. The remainder of the sperm swim up the uterus, and into the fallopian tubes. If an egg is present at this time, a single sperm may penetrate the outer lining of the egg and fertilize it.

Over the next three to four days, the fertilized egg (now called an embryo) will travel down the fallopian tube into the uterus. As it travels, the cells in the embryo begin to divide rapidly. After two or three more days, the embryo attaches to the lining of the uterus, where it will grow and develop throughout a woman’s pregnancy. The pregnancy produces a hormone called human chorionic gonadotropin (hCG), which signals the ovary to continue to produce progesterone and prevent the woman from having her menses.

Eventually, the pregnancy makes its own progesterone. Progesterone levels rise throughout pregnancy and fall with delivery.

Normal fertility is a pregnancy achieved within 12 months of unprotected intercourse. About 85 percent of couples in their 20s through mid-30s will become pregnant in that time frame.

There are three things a couple must have to get pregnant: the woman must ovulate, the man must have sperm, and the woman must have open fallopian tubes. If any of these are not optimally functioning, a couple may experience infertility, which affects about 15 percent of couples at any point in their reproductive lives.

While most couples do get pregnant after one year of unprotected intercourse, it is important to remember that the likelihood of becoming pregnant each month is actually quite low.

Because of this decrease in fertility, some treatment options become less successful. The monthly chance of conceiving among couples in which the woman is less than 32 years old is approximately 20-25 percent. This is why women in their mid-30s should wait no more than six months before seeking care. This illustrates that human reproduction is very inefficient.