Protect your fertility from endocrine disruptors, born of disintegrating plastics, that affect eggs and sperm 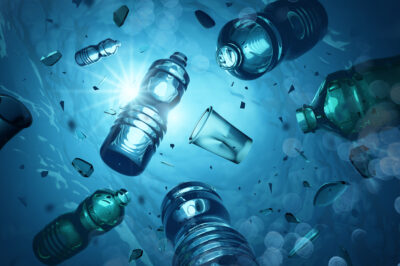 In January 2020, researchers at Harvard Medical School were able to show for the first time ever how the chemical di(2-ethylhexyl) phthalate, or DEHP, that is commonly used in plastic is an endocrine disruptor. An endocrine disruptor is any chemical that can interfere with the hormonal, or endocrine, system.

In terms of fertility, this means that molecular plastic particles that enter the human body through the skin, ingestion or breathing can interfere with the hormonal and reproductive systems of both men and women. It’s estimated that the average American ingests at least 74,000 microplastic particles per year.

And if one drinks water only from purchased plastic bottles, that’s an additional 90,000 plastic particles a year. Drinking tap water adds just 4,000 particles.

The team at Harvard proved that the chemical DEHP, which aids in plastic’s pliability, interrupts embryonic cell division that would normally lead to the development of eggs and sperm. It also leads to defects during egg formation that can affect fertility. To quote the senior author of the report, “These are completely new findings and hopefully will shed some light as to how this phthalate [plastic compound] impacts human reproductive health.”

Having difficulty conceiving? We can discuss possible causes and actions during a consultation.

Endocrine disruptors are in hundreds of plastics

Phthalates, bisphenol-A (BPA) and hundreds of other chemicals found in plastics appear to be endocrine disruptors. BPA is the most well-known and is a chemical used to make hard, clear polycarbonate plastics like those in reusable water bottles. BPA is also used in epoxy resins, which line the insides of metal food cans and is present on cash register receipts.

The dangers of plastics and their chemical derivatives like endocrine disruptors have been in the news for a decade, raising concerns about negative effects on the human body, such as cancer and diabetes. In fertility medicine, we are particularly concerned about the effects plastics on hormones, especially how BPA may affect infertility.

Large studies on the dangers of plastics for humans are few and far between. There are, however, numerous small studies that indicate plastics contribute to the causes of infertility. There is even evidence that problems created in a parent can be passed down to offspring. The plethora of competing information out there can be very confusing.

On one hand, The U.S. Food and Drug Administration (FDA) maintains that BPA is safe for use in food containers and packaging. The agency’s National Center for Toxicological Research says its studies show no effects from low-dose BPA exposure.

On the other hand, in response to the wave of consumer fears about BPA over the last 10 years, plastics-makers have developed a wide variety of BPA-free products, from baby bottles and sippy cups to beer cans. According to the Can Manufacturers Institute, most food cans are no longer lined with BPA.

On a third hand, the replacement chemicals for BPA, including bisphenol-S (BPS), are now under scrutiny for not being any less harmful than BPA. Studies in mice show that BPA alternatives decrease sperm counts and cause less-viable eggs. If offspring to these mice are also exposed to BPA, then their offspring have even more severe issues.

According to Scientific American, a 2011 study found that “almost all of the 455 commercially available plastics that were tested leached estrogenic chemicals.” That means thousands of products made of plastic – even those purported to be BPA-free – tested positive for hormonal estrogen-like qualities that, once the particles are inside the body, hinder natural estrogen production and use.

What is a person supposed to believe?

Our advice on plastics & fertility

Out of an abundance of caution, we tell our patients to minimize plastics. We tell them there is no evidence that BPA-free products are any better than those with BPA. It may be good for them and good for the planet if we can eliminate plastics. Of course, it may be nearly impossible to avoid all plastics and endocrine disruptors.

In general, we advise using glass or metal water bottles. However, some metal water bottles have plastic liners, so you must be careful. The best advice is to keep your own, trusted water bottle at hand. If you are in a situation where you must drink water purchased elsewhere, get tap water. Only in emergencies do we advise drinking out of plastic water bottles which have been heated, such as those left in hot cars.

Also, like all drugs, the extent of the problem these products cause can be highly individualized, meaning they might affect one person to a greater extent than the other.

In a 2014 report, 11 scientists found that BPA interrupts cell division in the ovaries and alters menstrual cycles and the uterus. They deemed BPA to be a uterine toxicant. Still another study of 174 female in vitro fertilization (IVF) patients found that the higher the concentrations of BPA in their urine samples, the more likely there was to be a decrease in their cells maturing into eggs.

One study found links between BPA and estrogen in 44 women undergoing IVF (BPA levels in their blood corresponded to decreased response to ovarian stimulation). The same study also showed BPA levels in men’s blood may affect the quality of embryos in IVF.

The Guardian newspaper reported in May 2019 that two chemicals commonly found in homes damage the quality of sperm: DEHP and polychlorinated biphenyl 153 (PCB153), which is present in older plastics and electrical equipment.

Even though manufacturers stopped producing PCBs in the late 1970s due to known health risks, these plastics are ubiquitous, the newspaper states. Roughly two-thirds of the plastic ever produced (more than 8 billion tons, mostly since the 1950s) have been breaking down into nanoparticles and are present in the air, water and soil.

Whether causes of infertility stem from genes or the environment, we may never know. But there are actions adults can take to safeguard their intake of plastic particles in their bodies.

Check out Consumer Reports for more good ideas for limiting the leeching and intake of plastic particles and endocrine disruptors.

Want to find out more about how various health factors can affect infertility?