PCOS at a glance:

Polycystic ovary syndrome, or PCOS, is a common hormonal problem that occurs in approximately 1 in 10 women in the U.S. Hormones are chemical messengers controlling the major bodily functions, from simple basic needs like hunger to complex systems like reproduction, and even emotions and mood. 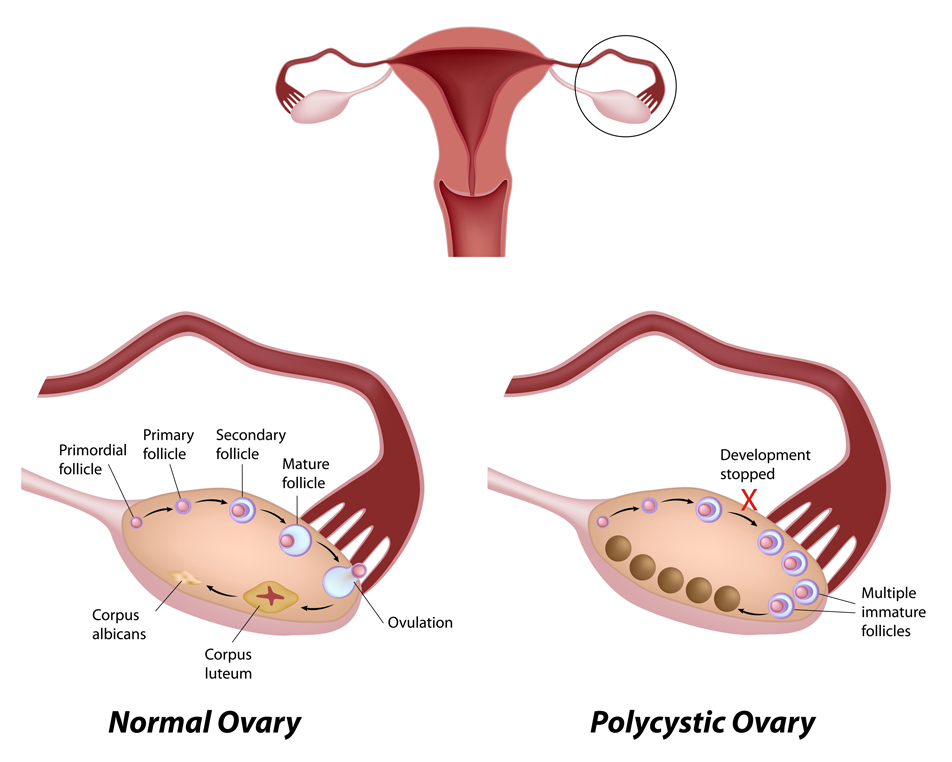 In this syndrome, high levels of male hormones (androgens) interfere with normal function of the ovaries. This in turn disrupts the normal release of progesterone, a sex hormone involved in the menstrual cycle and during pregnancy. Androgens are considered “male hormones.”

Insulin is the hormone that regulates sugar (glucose) in the blood. Although the relationship is not fully understood, a major underlying factor to developing polycystic ovary syndrome symptoms is insulin resistance – meaning women are no longer able to fully absorb or break down sugars.

Progesterone is a sex hormone created during menstrual cycles and plays a role in maintaining pregnancies. Since PCOS affects ovulation, women with it have low progesterone levels, which has been linked with an increased risk of endometriosis, uterine cysts, weight gain and mood swings.

Common symptoms of the condition include abnormal menses, unwanted facial hair (called hirsutism) and acne. In severe cases, balding may occur. Because many women with polycystic ovary syndrome do not ovulate (release an egg for the sperm to fertilize) on a regular basis, infertility is a common complaint.

Low progesterone levels have also been linked with an increased risk of endometriosis, uterine cysts, weight gain and mood swings.

Many women with this condition also have trouble metabolizing sugar efficiently, and are prone to problems such as diabetes, high blood pressure and high cholesterol.

Are ovulation problems affecting your fertility?

Find out about ovulation testing

Women of all races, ethnicities and ages are at risk for PCOS. Symptoms are often vague and present differently according to each individual. So to reach a diagnosis of PCOS, doctors must identify at least two of the following symptoms in a woman:

Other conditions can mimic PCOS and must be excluded before a conclusive diagnosis can be made. These conditions include thyroid disease, hyperprolactinemia, congenital adrenal hyperplasia, hypogonadotropic hypogonadism, and ovarian or adrenal tumors.

On occasion, Cushing’s syndrome and acromegaly (excess growth hormone) should be investigated.

A doctor may recommend blood, insulin and glucose level tests to determine hormone levels and whether or not symptoms are a result of PCOS.

Treatment for PCOS can be highly varied and individualized, depending on a patient’s goals and symptoms. While PCOS is a leading cause of fertility problems, it does not mean that a woman is infertile. In fact, PCOS is very treatable and many women with PCOS do get pregnant naturally or with the help of fertility treatments.

For women who hope to become pregnant, ovulation induction with medications such as clomiphene citrate or letrozole is often effective.

Dr. Scotchie worked with the Wood family for a year to overcome PCOS.

Some women will not ovulate even with high doses of clomiphene citrate or other medicines taken by mouth. These women may require injections of gonadotropins to induce ovulation.

For women who want to manage long-term complications of PCOS, it is essential to maintain a healthy diet and exercise routine. Birth control pills or other medications may help reduce male hormones and restore normal menses.

Women with PCOS can be at an increased risk for developing several other conditions. Because PCOS often affects ovulation, women can be at risk for problems related to that. Not ovulating alters the normal hormone cycle, sending too much estrogen to the uterus. The lining of the uterus (endometrium) can thicken and cause abnormal bleeding. This can lead to uterine cancer and other changes.

Women with PCOS are also at higher risk for metabolic syndrome. Symptoms of metabolic syndrome include high cholesterol, high blood pressure, extra weight around the midsection and insulin resistance and diabetes. All of those increase a woman’s risk of heart disease.

In some cases, medications to improve glucose metabolism are helpful. If diabetes and/or hypercholesterolemia are diagnosed during evaluation, we strongly recommend close management by a primary care physician or endocrinologist.