Brenda and Pablo recount the long, bumpy road that led them from Guatemala to Nashville to TRM.

“Every time we went to a fertility clinic, it felt like it was a business,” Pablo says of his disheartening struggle to have a child with his wife Brenda. “With TRM, we had the feeling that it was a relationship.”

Pablo and Brenda’s struggle to conceive began a thousand miles away in the nation of Guatemala, where they lived before moving to the States a few years ago. After marrying in 2004, they decided to wait a while before they started trying to get pregnant. In 2010, following months of trying to conceive with no success, they decided to visit a local fertility clinic.

“At the clinic in Guatemala we were told that we were having trouble because we were both getting older. Both of us were in our mid-30s at the time.” They underwent a round of intrauterine insemination (IUI), but the procedure was not successful.

Soon thereafter, the couple made a move to Dallas, where Pablo pursued a job opportunity. Still strongly desiring a child, they continued to seek treatment. At a Dallas fertility clinic, Brenda received a round of injectable hormones to help her ovulate. Again, the treatment did not lead to a pregnancy. Brenda vividly recalls the fear and discouragement they were facing at this point.

“Every time we went to the fertility clinics in Guatemala and in Dallas, it just didn’t feel right,” she explains. “I wasn’t comfortable. I was scared. I just had a feeling in my heart that something wasn’t okay. We were treated very impersonally, and it was an extremely emotional time.”

Pablo’s job soon led the couple to move from Dallas to Nashville. Unwilling to give up on their dream, Brenda knew that part of the moving process would involve searching for yet another fertility clinic.

“I told Pablo, if we were going to move, the first thing I wanted to do is check for a fertility clinic,” she explains. “We checked different options in Nashville, and nothing looked good to us. We looked in Chattanooga, and one of the things we liked was that TRM offered natural IVF.”

Pablo adds, “We didn’t realize that this treatment type existed. Finances were a concern, and that’s why we started with IUI in Guatemala. But it wasn’t just the budget.”

“I didn’t want to have a lot of medications, either,” Brenda continues. “I wanted to try the natural IVF treatment first.”

Natural cycle IVF is a procedure in which in vitro fertilization (IVF) is administered without artificially stimulating a woman’s ovaries to produce multiple eggs. This means that the procedure is less expensive than standard IVF. But as you might expect, it has lower odds of success. These lower odds combined with the fact that clinics must publish their IVF success rates each year leads many clinics to not offer natural IVF as an option, as it brings down the overall rate.

Brenda and Pablo scheduled a consultation with Dr. Rink Murray, hoping that their experience with this clinic would be different – and the two-and-a-half-hour drive from Nashville would be worth it.

TRM was the right fertility clinic

“At first impression, I told my husband: This is the doctor I want to treat me,” says Brenda. “He treated us like human beings, he shared his own struggles with infertility, and we felt connected. He truly wanted to help us. I felt like it was the right place to be. Dr. Murray told us that natural IVF was risky, but at the same time he explained that we were perfect candidates for the treatment.”

Pablo was put at ease by the fact that TRM offers natural IVF in spite of its negative effect on clinical success rates.

“Dr. Murray explained why a lot of clinics may shy away from natural IVF,” Pablo explains. “This was one of the things that convinced us that he was truly concerned about us. That was a great gesture.”

In 2013, after countless drives from Nashville to Chattanooga for ultrasound monitoring and patiently waiting for the perfect time to perform a natural IVF cycle, the couple was able to transfer two embryos. Then, on February 10, 2014, Pablo and Brenda welcomed their daughter, Sophia, to the world.

“It was a miracle, I’m telling you,” Brenda insists. “We were praying every day for God to give us a baby and we didn’t know why it was taking so long. But now we know that it was because he was forming something breathtaking and beautiful. He was in the process of forming a masterpiece in the right time. When you’re going through this, it’s so hard to believe in medicine and doctors – to trust them. You always suspect that they are just in it for the money. I know that God brought us Dr. Murray.”

Now the proud mother and father of a toddler, Pablo and Brenda are enjoying all that parenthood has to offer.

“Things are going fantastic,” Brenda says. “Being a parent is a lot of work, but it’s so worth it.”

A note from Dr. Murray 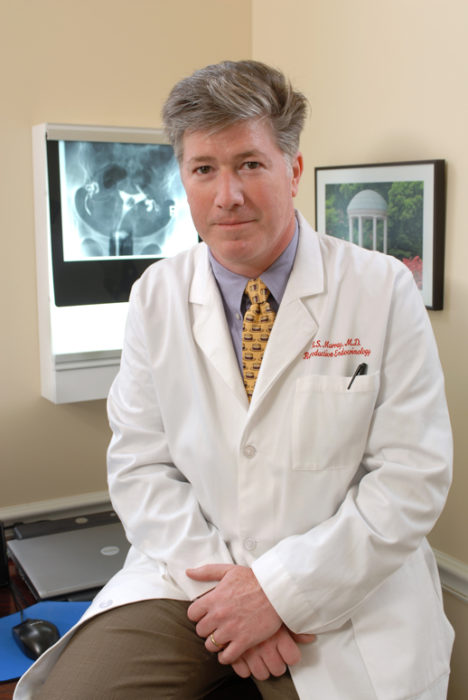 Brenda and Pablo were not an easy case. She is a really good example of having to treat each person’s unique physiology. She had diminished ovarian reserve, which means she only brought a few eggs out of storage each month. Sometimes when this happens, women get something called advanced follicular maturation, and ovulation occurs much earlier than normal.
In practical terms, it the same thing as woman’s “biological clock.” In medical terms, it’s Ovarian Reserve.

In Brenda’s case, ovulation was happening before her uterine lining had a chance to get thick enough to support a pregnancy. So she had two big things working against her: Premature ovulation and a low egg number.

We actually had to slow down her early egg development by giving her high-dose estrogen before her period even started. Then we gave her medicine to prevent ovulation from the start of her IVF cycle in order to let her uterine lining grow before the eggs matured. It was a protocol we created for her, based on her physiology.

Challenges like this are scary for patients and the doctors alike, because we don’t know if our experiment is going to work. However, even in cases where we are not successful, it is rewarding to know that we tried everything we could.

On a final note, if a patient can do either natural cycle IVF or standard IVF, usually standard IVF has a higher chance of success. In Brenda’s case, without a natural cycle option, we could have priced her out of doing IVF. I say this because no matter how much medicine we gave her, she was never going to produce a lot of eggs. The fewer eggs produced, the lower a couple’s chances of getting pregnant.

If we billed the patient the same price as regular IVF, we could discourage them from trying the best option they have for success. I am so glad I have a partner in Jessica Scotchie who has the same passion for meeting the patient where they are and who is willing to get creative in crafting unique approaches to patients.