Regular menstrual cycles that include ovulation are important for a woman’s health and well-being – whether or not she’s trying to get pregnant. 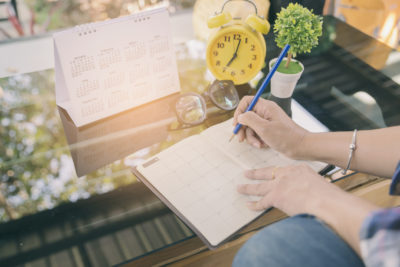 As a fertility doctor, many of the conversations I have with my female patients regarding ovulation are related to their desire to get pregnant and have a baby. Regular, predictable ovulation is one of the three pillars of achieving pregnancy, along with healthy sperm and an open system (both partners’ reproductive anatomy being free of blockages and other abnormalities). Understanding when and if ovulation is occurring can make all the difference for a couple trying to conceive.

What my patients sometimes do not realize is that routine ovulation – the predictable release of a mature egg from the ovaries during the menstrual cycle – serves an important role in a woman’s overall health, whether the egg gets fertilized or not (and whether or not she is trying to become pregnant).

If ovulation is not occurring or is happening infrequently in a woman of reproductive age, there is cause for concern. Just because a woman has periods doesn’t mean she’s ovulating. Infrequent or lack of ovulation is the most common cause of infrequent menses, heavy menses or even menses that never seem to stop. The good news is that this is often a treatable problem.

What happens during the menstrual cycle

To drive home the point that regular ovulation is critical to a woman’s health, I’d like to explain some of what happens during a woman’s monthly cycle. The chart below illustrates the way in which hormones regulate the release of the egg from the follicle while also thickening the uterine lining in anticipation of the fertilization and implantation of the egg.

What you see in the illustration represents an average cycle, which is 28 days in length. The cycle begins with menses, which is heralded by symptoms which may include cramping, breast tenderness, mood change, bloating and fatigue. When these symptoms are more severe, it’s called premenstrual syndrome or PMS. While unpleasant, premenstrual symptoms and PMS tend to indicate that ovulation has occurred, so they are often a good sign that things are operating as they should be. 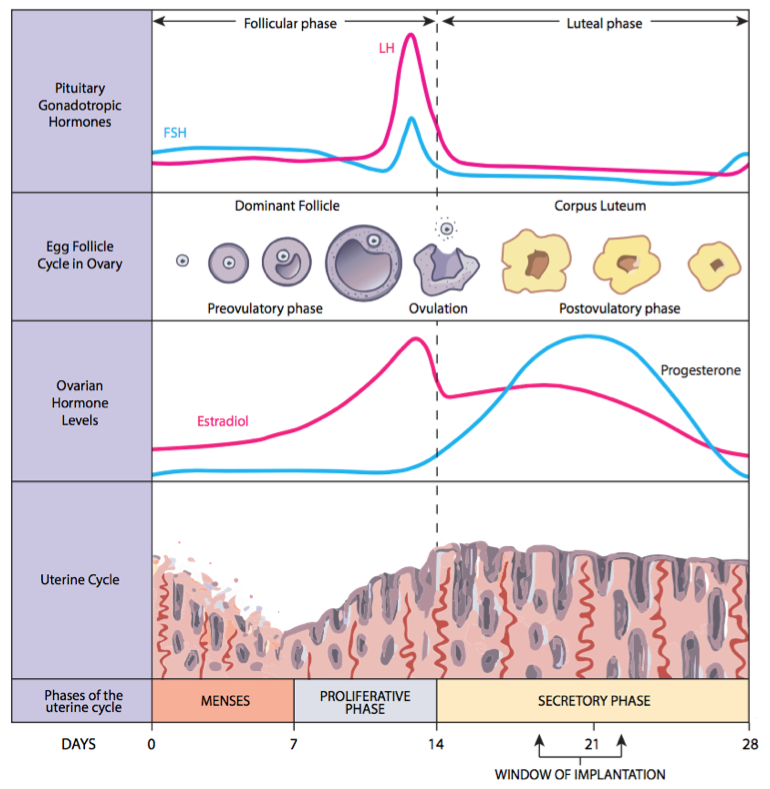 The rising and falling pink and blue lines on the chart illustrate the varying levels of hormones during the ovarian cycle. The ovarian cycle is divided into the follicular phase (during which follicles prepare to release an egg), the moment of ovulation, and the luteal phase (during which the dominant follicle that released the egg morphs into a structure called a corpus luteum).

While it may seem odd to think of it this way, the menstrual cycle actually “begins” with menstruation. During menses (days 0-7 in the above chart), cramping symptoms that preceded a woman’s period may continue as the uterus contracts to expel menstrual fluid. Simultaneously, hormones will begin to stimulate an egg follicle to be released for fertilization. As menses concludes, the dominant egg follicle secretes estradiol, which causes the uterine lining to thicken and build in preparation of pregnancy.

When the dominant follicle is fully mature, it is secreting a high level of estradiol. A tiny bump in progesterone production causes a spike in the hormones LH (luteinizing hormone) and FSH (follicle-stimulating hormone). This rise in LH is called the LH surge. This is what ovulation predictor kits are trying to detect. The egg usually releases about 36 hours after the LH surge begins. Ovulation typically occurs around day 14 in a 28 day cycle. The egg will live up to 24 hours unless it is fertilized. Because sperm can live up to six days, a healthy couple having regular intercourse (once every three days or so) don’t need to worry too much about timing things perfectly.

If the egg is fertilized, it becomes an embryo and travels down the fallopian tube into the uterus where implantation and pregnancy begin (see window of implantation above). Implantation typically occurs about seven days after ovulation.

As you’ll note on the chart, a woman produces an increased amount of progesterone following ovulation and the growth of the uterine lining ceases. In essence, the progesterone is turning off the “growth genes” (estradiol) responsible for thickening the lining of the uterus. Progesterone will go on to play a vital role in pregnancy should it occur.  If implantation does not occur, progesterone levels will decrease dramatically, which will lead to menstruation and the start of the next cycle.

If a woman does not ovulate during a given cycle, the spike in progesterone does not happen as described above. Instead, the growth processes driven by estrogen continue. This unchecked growth has a marked effect on her ability to get pregnant, but can also increase the risk of other complications.

Essentially, anovulation or irregular ovulation indicates that something is a little off in the delicate balance of hormones produced by the pituitary gland and ovaries. Over time, this can increase the risk that a woman will develop certain types of cancer.

Women who have regular periods preceded by premenstrual symptoms are usually ovulating normally. However, if a woman suspects she’s having issues with ovulation, ovulation predictor kits can be helpful in determining whether or not an egg is being released during her cycle. Other ways to tell if a woman is ovulating is by using a basal body temperature chart, or by checking a serum progesterone level about seven days before her suspected menses.

We can help women with ovulation disorders, even if they aren’t trying to get pregnant.
Contact Us  Request Appointment

Ovulation disorders should be treated

Ovulatory disorders are usually treatable. The first step is to determine what’s preventing ovulation from occurring. Some common causes of anovulation include polycystic ovary syndrome (PCOS), being underweight or overweight, excessive exercise and anxiety.

Depending on the underlying cause and a patient’s family planning goals, we may recommend that she modify her lifestyle, engage in stress management techniques or receive medical treatment in the form of injections or hormonal birth control. In some cases, intrauterine insemination (IUI) or in vitro fertilization (IVF) may be helpful or necessary in order for pregnancy to occur.

If you are not pregnant, are not having regular menses and are not under treatment to protect your uterus, talk to your doctor.