To avoid another miscarriage, Dr. Scotchie gave Meredith progesterone in her first trimester of pregnancy 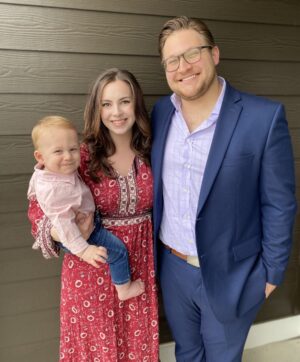 Meredith and Dillion’s story may sound familiar to many: boy meets girl, they fall in love, get married and soon get excited to start a family. But after two miscarriages within six months, they worried staying pregnant may not be as easy as they once thought.

They immediately reached out to their OB-GYN in Chattanooga.

“When I found out I was pregnant for the first time and shortly after I had a miscarriage, I didn’t think a whole lot about it. It was very unfortunate and it was devastating, but I knew that it was somewhat common,” Meredith says.

“I was young and healthy. There was really no explanation that they could give me.”

Given the circumstances, Meredith’s OB-GYN referred the couple to TRM. Despite COVID-19 being in full swing, they soon set an appointment with TRM’s Dr. Jessica Scotchie.

Finding hope and a plan by seeing the right fertility specialist

“My first encounter with Dr. Scotchie was unlike any other appointment that I had had,” recalls Meredith. “It was very warm. We just sat in her office. There was no exam table. There was no medical equipment around or anything like that. She just wanted to know my story, all the details and come up with a plan. I remember leaving and just feeling such hope. which I hadn’t felt in a long time.”

After getting details of their medical and reproductive history, Dr. Scotchie ran several tests for both female and male-factor infertility. When tests came back OK, Dr. Scotchie then completed an ultrasound and hysterosalpingogram, imaging tests to help see and identify issues in the reproductive anatomy that could contribute to infertility. These issues can range from a blocked fallopian tube to scar tissue.

Fortunately, the couple seemed to check out OK on all fronts. This led Dr. Scotchie to believe they were in fact able to carry a pregnancy. The concern was staying that way.

Fortunately, Dr. Scotchie had a plan.

“She said, when you’re comfortable, I want you to try again,” Meredith says. “But call me immediately when you do get pregnant. I am going to follow you closely and prescribe progesterone for the first trimester.”

Progesterone is a reproductive hormone involved in the menstrual cycle that tells the uterus to be receptive to an embryo that may try to implant. Progesterone is produced by the ovary initially and later by the placenta during pregnancy. Research also shows that it can sometimes help reduce recurrent pregnancy loss in women.

If all went according to plan, Dr. Scotchie would carefully monitor Meredith’s hCG (human chorionic gonadotrophin) levels in early pregnancy, prescribe progesterone, and perform weekly ultrasounds for Meredith during the first trimester of pregnancy. Then, if all seemed well, she’d transfer care back to the couple’s local OB-GYN.

After getting the green light to try to get pregnant, the couple quickly discovered they indeed were. They called TRM with the good news and were asked to come in that week for lab work.

From there, Meredith took progesterone twice a day for several weeks. She also came in to TRM at least once a week for labs and progress updates.

Don’t let me be misunderstood: our take on progesterone

Around the six-week mark, the couple hit a marvelous milestone: the baby’s first ultrasound.

“I was a wreck,” explains Meredith. “I had so much anxiety. I had never had a great ultrasound, there were always questions and a lot of silence in the room. Dr. Scotchie actually performed the ultrasound herself.”

“I was waiting for her to say, I’m sorry, Meredith, there’s no heartbeat or We’re not seeing proper development. But within 10 seconds, we heard a heartbeat. That was the craziest feeling ever. I had never heard that before.”

Meredith recalls the many weeks she spent with TRM fondly, especially how personable and helpful Dr. Scotchie was.

“I come from a medical background and while I felt she took that into consideration, at the same time, this was my first pregnancy, so she made it very simple,” Meredith says. “After 12 weeks, all was in normal range and she said, ‘You’re graduating.’ “I went back to my midwife and had a textbook pregnancy.”

Everything went wonderful, and the couple now has a beautiful, 1-year-old son.