If you are thinking about getting pregnant or are actively trying, you can do things to increase your chances of conception and of having a healthy pregnancy.

For couples and individuals who spent their early reproductive years trying to avoid getting pregnant, making the switch to trying to get pregnant can seem like a walk in the park. At first. But for many, many people, it’s not as easy as they may have thought it would be. 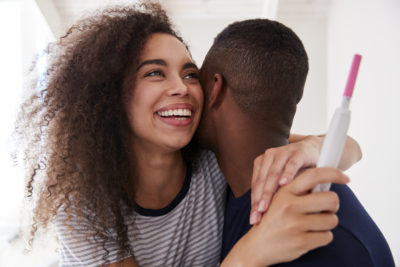 Each one of the Tennessee Reproductive Medicine staff members wants you to get pregnant – without ever walking through our doors. Of course, if you need help, we’re here for you. But before you consider that option, you should make every attempt on your own to maximize your fertility to increase your chance of success.

And while just getting pregnant may seem like the ultimate objective – especially for someone having difficulty with conception – the real goal is having a healthy pregnancy for the benefit of child and mother.

We offer our expertise on how to achieve both objectives. Steps to take for a healthy pregnancy should begin in tandem with steps you take to get pregnant.

Getting healthy before trying to get pregnant

A healthy pregnancy begins with healthy parents. Prioritizing your health can optimize your chances of getting pregnant and of having a healthy pregnancy. Following are things to do and things not to do.

According to the American Society for Reproductive Medicine (ASRM), obesity can lead to infertility in men and women. The menstrual irregularities it can cause in overweight and obese women can affect ovulation and egg quality. Obesity in men can decrease the quality of semen and contribute to erectile dysfunction.

Obesity and being overweight can make a woman’s pregnancy more difficult. Obesity is associated with higher rates of miscarriage. A normal body weight has been linked to lower rates of complications including preeclampsia, diabetes and pre-term delivery.

Individuals with a body mass index (BMI) of 40 have a higher risk of pregnancy complications including birth defects. The U.S. Department of Health & Human Services has an easy BMI calculator available on their website. There is also a risk for women who are underweight or taking steroid medications to experience bone fractures during pregnancy.

Regular, moderate exercise is a good idea for everyone, including those trying to get pregnant. Women who exercise too much may have trouble conceiving, so it is important to not overdo it. Exercising for no more than 45 minutes, five times per week, is considered a good standard, but moderate exercise can vary for each individual.

There is little evidence that a specific type of diet such as vegetarian, low-fat or antioxidant, influences fertility. But maintaining a healthy diet composed of lean meats, fruits, vegetables and whole grains is best for not just those trying to get pregnant, but everyone. In general, good nutrition that involves a balanced diet and caloric intake appropriate for the individual will help men and women avoid being overweight or obese, which affects fertility.

Vitamin D is also important in many aspects of both female general health and pregnancy. Good sources of vitamin D include fish, orange juice and sunlight. The daily recommended intake of vitamin D is 600 IU daily. The U.S. Department of Health & Human Services also recommends a supplement of 400 micrograms of folic acid each day.

A study published in the American Journal of Obstetrics & Gynecology found a link between caffeine intake and an increased risk of miscarriages. Caffeine can hinder the body’s ability to absorb calcium and iron. It is recommended to consume less than 300 mg of caffeine per day.

Alcohol’s effect on a woman’s ability to get pregnant has not been firmly established. However, some studies indicate it can reduce fertility, some show it does not. Heavy alcohol consumption is also associated with higher than normal estrogen levels, which can impair egg growth. ASRM recommends that women trying to get pregnant refrain from having more than 2 drinks a day.

General health advice is that pregnant women should not consume alcohol or severely restrict their intake. Increased miscarriage rates have been linked to alcohol consumption. When it comes to in vitro fertilization (IVF), just 1 drink per day has been associated with lower pregnancy rates and higher miscarriage rates once pregnancy is achieved.

Women who smoke or are married to smokers have lower monthly pregnancy rates. For women, smoking is known to have a negative impact on estrogen levels and can impair ovulation. ASRM has found that the chemicals in cigarette smoke can speed up the loss rate of eggs. Men who smoke can have a decrease in their sperm quality and motility (effectiveness of movement). Smoking while pregnant can also decrease the number of gametes (eggs and sperm) in the child you are carrying, increasing their risk of future infertility.

Start the conversation about pregnancy now

It may seem unnecessary, but a preconception counseling appointment can be beneficial in your pregnancy journey.

Talk with your OB/GYN

Speaking with your doctor about your pregnancy plans gives you the opportunity to discuss the best vitamins, diet options and medical history. Your doctor can identify any risks that could negatively impact your pregnancy and help address those early. Some topics of discussion may include:

Your doctor may also do a physical exam including a pelvic exam and Pap smear. Lab testing for hepatitis, HIV and other conditions is not uncommon at a preconception counseling appointment.

Both rubella, which causes German measles, and chicken pox can be extremely harmful – and sometimes fatal – to a baby and pregnant woman. Neither of these viruses can be vaccinated against while pregnant, so testing and vaccination prior to conception are advised.

Groups commonly at high risk for genetic disorders that affect the health of a pregnancy or a subsequent child include:

In addition to genetic testing before pregnancy, women who have created embryos via IVF can utilize preimplantation genetic testing to help ensure a successful pregnancy and birth free of genetic defects.

Fertility testing uses blood tests and procedures to diagnose any infertility issues. These should be considered if a couple has been trying to get pregnant with no success for more than one year.

There are many myths and old wives’ tales about intercourse, including timing, position, the importance of an orgasm and more. When it comes to getting pregnant, don’t make it complicated.

Intercourse prior to ovulation is more likely to result in pregnancy. Sperm can live up to five or six days, which means, for most couples, intercourse every two to three days is adequate. Many couples fixate on the exact timing of intercourse when in truth exact timing is not the most important aspect of getting pregnant. Instead what is essential is that a couple has intercourse on, or prior to, the day of ovulation.

Intercourse 24 hours after ovulation has a very low chance of pregnancy. After ovulation, the egg lives only about 12-24 hours.

Ovulation usually occurs about 2 weeks before the expected menstrual period. For a typical 28-day cycle, ovulation is anticipated on days 13-15. Ovulation can be confirmed in various ways, such as ovulation predictor kits, basal body temperatures or a blood test. Dr. Murray tackled why predictable ovulation is important for not only women trying to get pregnant, but for women’s overall health on our Doctors’ Blog.

While it was previously thought that there should be a waiting period for a woman who has been taking birth control, that is no longer the accepted thinking. It is now believed that there is no reason to wait to attempt to conceive after going off birth control. Long-acting reversible contraceptives can be removed, and the woman should be able to conceive shortly thereafter.

Certain lubricants can have an impact on sperm motility and viability. When trying to get pregnant, avoid lubricants such as Astroglide, K-Y Jelly and saliva. In general, substances that are “condom safe” are sperm harmful. Most oils, like mineral oil, do not harm sperm.

All of the tips in this blog can help a typical, fertile woman get pregnant. If you suspect there may be a problem with infertility, due to infrequent menses, abnormal reproductive organs, family history of infertility or experiencing other conditions that can affect fertility, you may want to seek testing earlier.

We advise that if after one year of having unprotected intercourse on a regular basis with no luck, you should see a specialist. We recommend that women age 35 or older be tested after six months of trying to get pregnant, due to the decrease in fertility that comes with age.