What is ovulation testing?

Most women who have menstrual periods every 24-35 days release eggs (ovulate). However, regular menses do not guarantee ovulation. If a woman does not release eggs (anovulation), she will not get pregnant. If she releases eggs infrequently (oligo-ovulation), her chances of getting pregnant are reduced.

It is important to know if and when ovulation occurs. Women should ovulate approximately 14 days prior to expected menses. Women who have fewer than 13 days between ovulation and menses have short luteal phases and may have reduced fertility.

Tests of ovulatory function include basal body temperature charting, ovulation predictor kits and timed serum progesterone levels. We recommend against performing tests on salivary and cervical secretions, as these tests have not proven reliable.

When a special BBT thermometer is used on a daily basis, one can determine both if a woman ovulates and how long her luteal phase lasts. Proper technique is essential in order for your physician to interpret the results.

Intercourse in the two to three days before the temperature rises is most likely to result in pregnancy.

Below are some examples of normal and abnormal BBT graphs. An abnormal BBT should be investigated. If you have questions about your BBT, let us help you evaluate and understand the information.

An ovulation predictor kit (OPK) is another test that patients can use at home, which functions similarly to a home urine pregnancy test. OPKs measure the urinary level of luteinizing hormone (LH), the hormone that triggers ovulation.

Typically, LH levels rise rapidly in the 24 hours prior to ovulation. OPKs detect this rise, and are useful in helping couples know when to optimally time intercourse.

If menses occur within 12 days of the positive OPK result, the luteal phase may be too short to sustain a pregnancy, and a patient should consult her physician.

If you are unsure whether your OPK is positive or not, we can determine this with simple blood tests.

A menstrual cycle is measured from the first day of one period until the first day of the next. In a 28-day cycle, ovulation most likely occurs in the two to three days around the 14th day of the cycle. The LH surge will precede this by one day, so you should begin testing on cycle day 11 to maximize the chance of detecting your surge.

Ovulation is likely to occur within 12-36 hours following a positive test. The optimal time for intercourse is the day after the positive test.

Try to test around the same time each day. Most test kits will instruct individuals to test with the second urination of the day. However, the LH rise is most likely to be detected if testing occurs in the mid-afternoon, from three to seven p.m.

Below is an example of a classically positive OPK: 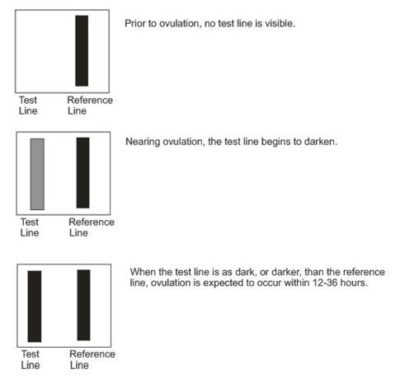 In our experience, relatively few women have classically positive results like the example here. Frequently, the LH surge looks more like the middle drawing. You may only know this if the kit darkens and the next day it fades. If this happens, have intercourse on the day it fades!

If you are uncertain if your test is positive, give us a call. Remember, simple blood tests can confirm whether this is a true LH surge or a false positive result.

Serum progesterone measurements are a reliable way to document ovulation. The human body produces very little progesterone, except during the luteal phase (two week period between ovulation and menses).

In our experience, progesterone level interpretation is one of the most misunderstood fertility evaluations, by patients and doctors alike. A common misconception is that a progesterone must be 10 ng/ml or greater to confirm good quality ovulation. In truth, there is a lot of variation in progesterone levels over the course of 90 minutes. Some studies have shown that progesterone levels can vary from as low as 2 ng/ml to 40 ng/ml within the same day.

Beyond that, the length of the luteal phase is more informative about adequacy of progesterone production than the absolute progesterone level.

Around the time of ovulation, estrogen levels rise and cause more water to be secreted into the cervical mucus. The mucus can become thinner, or stretch more when held between the fingers. Women can check their own cervical mucus to see if it becomes thinner.

Nevertheless, there is little harm in checking for cervical mucus changes. We recommend that cervical mucus testing not be the only method used to determine ovulation.

These have been shown to be unreliable and we do not recommend them. Salivary ferning microscope tests will sometimes even show that men and post-menopausal women are ovulating. Clearly, these results cannot be interpreted with any confidence.