Assisted hatching at a glance

What is assisted hatching? 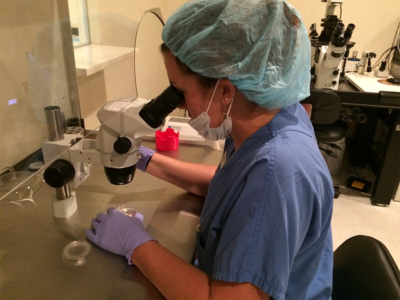 This is a procedure in which the outer shell (zona pellucida) of a fertilized egg is gently thinned or ruptured using either an enzyme, specialized chemical solution or laser. For pregnancy to occur, the embryo must first shed the zona pellucida.

This process, known as hatching, usually occurs naturally around five to seven days after the egg is fertilized, becoming an embryo. At this time the contraction and expansion of the embryo allows enzymes to create the opening in the zona pellucida.

Sometimes embryos fail to hatch on its own, often due to an abnormally thick zona pellucida or other deficiencies in the embryo’s makeup. This assistance aids the embryo in the natural hatching process and may increase the chances of successful implantation and pregnancy.

The procedure isn’t recommended for all IVF patients, according to the American Society for Reproductive Medicine. Fertility specialists may recommend that the IVF lab perform assisted hatching before embryo transfer if the woman’s reproductive profile indicates she may have problems with successful implantation.

Assisted hatching may be recommended for women:

How is this performed on the embryo?

Thinning or rupturing of the zona pellucida is accomplished in one of several ways:

If a woman is struggling to achieve pregnancy via IVF, the potential for a successful IVF cycle using assisted hatching may outweigh these risks. Women and couples should discuss these issues with their fertility physician beforehand.

Make an appointment to discuss assisted hatching and other fertility treatments. Get Started