The gift of egg donation 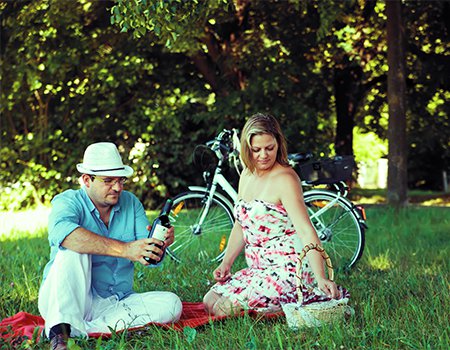 For most of her life, having children was not a priority for Faith. She and her husband David were happily married, involved with their careers and just never got around to it. It wasn’t something they truly desired.

“Pregnant women are cute, you know?” Faith laughs. “I just didn’t want to be one! I always thought, ‘Pregnancy…what a great way to ruin your figure!’”

But at 43 years old, Faith had a life-altering realization while on vacation.

“God had been working on me for over a year to get me ready – I just had no idea there was a much bigger plan in the works. I’d poured my heart and soul into my career for a long time. But it was like a switch flipped. I call it ‘dream day.’ He planted in me the unmistakable desire to have a child. The light just turned on and I knew I wanted to be pregnant.”

For Faith, the realization came unexpectedly. She was excited by the proposition of a child, but reality quickly set in.

Three years earlier, Faith had some medical complications that required her to have an endometrial ablation: a procedure most often used to destroy the uterine lining – or endometrium – to reduce menstrual flow.

Since pregnancy wasn’t medically advisable after the ablation, she also used Essure: a permanent form of birth control that uses small metal coils inserted into the fallopian tubes. Scar tissue forms around the coils to block the fallopian tubes and prevent sperm from reaching, and fertilizing, an egg.

Though the desire to have a child was very real, Faith wondered: Would pregnancy be possible? Her regular monthly cycle had returned that year. Did that mean her endometrial lining had grown back?

After consulting with her ob-gyn, she was referred to Dr. Jessica Scotchie, a fertility specialist at Tennessee Reproductive Medicine.

“I already knew I was very high risk and anything but textbook as far as getting pregnant was concerned. I said that to Dr. Scotchie right off the bat,’” recalls Faith.

“Tell me your story”

Those were Dr. Scotchie’s first words at the initial consultation. Faith says she was very impressed with Dr. Scotchie’s immediate interest in understanding her personal journey of wanting to become a mother. “I thought she’d dive right into all the possible medical complications. But she wanted to know my heart. That meant so much.”

From then on, Faith knew she had been referred to the right clinic and doctor. “She and her staff were so dedicated to me and my goal of growing our family. They became extended family because of their sincere care and interest in us.”

Because of the previous ablation, Dr. Scotchie performed an ultrasound and determined that, despite the damage she thought she might find, Faith’s uterine lining looked good. However, the use of Essure to block the fallopian tubes meant in vitro fertilization was necessary for pregnancy to be possible.

Dr. Scotchie determined that the quality of Faith’s eggs was not ideal due to her age. She suggested the use of donor eggs.

“One of my clients had already introduced me to the idea of using donor eggs,” says Faith. “Before then I wasn’t familiar with the use of another woman’s eggs and, to be honest, my knee-jerk reaction was that it seemed impersonal. I envisioned random eggs being pulled out and fertilized, so you had no idea what you were getting. But that’s not how it works at all.”

“As I learned more about the process of becoming a recipient and saw that my husband and I got to learn history on the donors and choose the best match, it became intensely personal.”

A precious act of sharing among two women can mean a child when it wasn’t thought possible.

Faith and David chose to use fresh eggs for the transfer – and not frozen eggs – so timing was everything. They knew that live birth rates for donated eggs with fresh cycle embryo transfer were good: the national average is currently 54 percent. Having settled on the donor, the couple’s excitement and anticipation had reached a peak.

Halfway through the IVF cycle, however, the couple received unwelcoming news from Dr. Scotchie: the donor was not responding to ovulation treatments. Faith says Dr. Scotchie was very disappointed because it is unusual for donors to stimulate poorly.

Only 5 percent of donors who receive egg-stimulating medication do not produce eggs.

Faith says she wasn’t deterred. “It was obvious that the donor we’d chosen wasn’t the right one for us. That door was clearly closed. This was God’s show, so I knew He had a plan.”

In order to stay on schedule for an embryo transfer later that month, Dr. Scotchie said frozen eggs would need to be used.

She suggested a donor who was new to the couple. When they reviewed her profile, they knew she was a perfect match. “My husband and I agreed that she was the most like me of any of the donors we’d looked at,” Faith recalls.

After the embryo transfer, Faith went back to Tennessee Reproductive Medicine nine days later for blood work to determine if she was pregnant.

The couple anxiously awaited the call with the results which would come later that day.

“My phone rang and I saw TRM in the display. It was Dr. Scotchie, and I could hear the excitement in her voice,” recalls Faith. “Faith, you’re pregnant!”

Faith says, “She could hardly contain herself. It meant a lot that she made the call herself, instead of having one of the nurses do it.”

Born last August, Faith looks at her baby girl and knows that she and her husband made the right decision to work with Dr. Scotchie and Tennessee Reproductive Medicine.

“I was so impressed that we have a fertility doctor here locally who is so emotionally and professionally invested in the success of her patients,” she says. “It was obvious how much the whole staff cared about us, and we really appreciate how sensitive they were to our case.”

Faith is thankful to TRM – and her egg donor – for helping her fulfill her dream to get pregnant and become a mother.

“Having the option of using donated eggs is an incredible gift,” Faith says. “It’s a great hybrid between adoption and being able to conceive a child on our own. Even though we couldn’t use my eggs, I was still able to experience pregnancy and have my husband’s genetic input.”