Embryo Development in the IVF Lab

The IVF laboratory is a critical part of the in vitro fertilization (IVF) process. The eggs that are harvested are placed into dishes where they will be counted and evaluated.

The embryos are cultured (or grown) in incubators with an environment designed to mimic the human fallopian tube. A careful balance of carbon dioxide, oxygen, and nutrients are maintained at the correct pH (acid content) to promote embryo growth.

Have questions about our IVF lab or want to talk to one of our expert embryologists? Contact Us

Embryo growth in our IVF lab

Embryos destined to result in pregnancy will progress through several well-defined stages including zygote, cleavage and blastocyst stages. Only normally fertilized eggs are kept in culture. 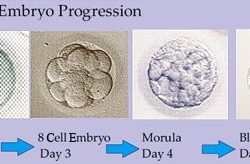 Not all embryos will grow in culture. Some of them will be genetically abnormal, while others cease to grow for unknown reasons.

Four days after fertilization, most normal embryos have reached the morula stage (too many cells to reliably count with a microscope).

Blastocysts are embryos that are nearly ready to implant. Blastocysts have developed three distinct regions:

On the second, third and fifth day after retrieval, the embryologist will evaluate the embryos and grade them. Day two and three embryos are evaluated on a one to five scale, with one being the highest grade.

Embryos that lag behind in development, those with fragmentation, or those with other abnormalities are given lower grades. A low grade doesn’t necessarily mean the embryo is genetically abnormal. Normal pregnancies may result from low-grade embryos; however, embryos with higher grades result in pregnancy more frequently.

Grade one to two embryos have a 20-35 percent implantation rate, depending on the age of the woman.

No evaluation of the embryos occurs at the morula stage (four days after retrieval) because the cell mass rarely has distinct features that are easy to grade.

On the fifth day after fertilization, most normal embryos have reached the blastocyst stage, as mentioned above. We grade blastocysts on a different scoring system than day two or three embryos.

The IVF lab gives each blastocyst is given a letter grade, A, B, C, D, E, or F, for the relative quality for each of the three regions: the inner cell mass, the trophectoderm and the cavity. A top-quality embryo will be graded AAA, though few embryos receive this high a grade.

If you have other embryos that are suitable for freezing, they can be frozen (cryopreserved).

It is critical to understand that morphology scoring of the embryos does not evaluate the genetic potential of the embryo (e.g., will the baby have a normal number of chromosomes) or the potential health of a baby that grows from the embryo.

While pre-implantation genetic testing can investigate the chromosome number of the embryo, no test can guarantee a healthy baby after IVF.